Happy New Year to All!

We had a great Christmas vacation with family in San Antonio including too much good food and too many late nights. Not to worry! All that excess was offset by sweet kisses from the grandsons. OK. Truth by told: Zac’s kisses were reluctant and Grayson’s kisses are still totally passive. The closest he gets to active participation is the production of slobber, but with four teeth coming in, there is no shortage in that department.

The very best part of Christmas was seeing my mom without pain. It was so very wonderful to watch her enjoy the holiday.

I had told Mom that if she would put up the Christmas tree and decorate the house, I would fix Christmas dinner. She did her part, but we were all invited to my nephew’s home for dinner on the big day. He and his fiancé did a fantastic job! It was really nice to see the next generation cook up the old family favorites. Some of those recipes were treated like sacred text, but others got a fresh twist. Fifteen of us crowded into their dining area. It was a wonderful Christmas dinner and there were plenty of other opportunities for me to cook while I was there.

Our family drew names this year for the exchange of Christmas gifts. I have to say it was much better than in years past when the mountain of gifts under the tree expanded to fill the entire living room. It seemed that we were all just a little closer to the Real Christmas! 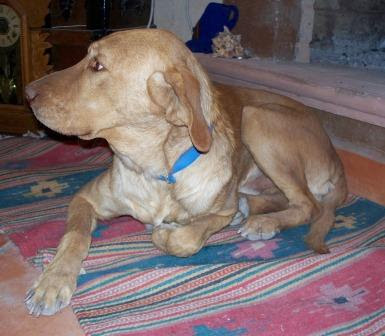 We have officially declared Solo Vino as the newest member of our family. A trip to the vet seemed to mark the declaration. Needless to say, he was not happy about it. The process included his first bath, his first collar, his first experience with a leash, his first car trip, his first visit to town, his first encounter with a vet, his first injection, the first time anyone had put a pill down his throat, and the first time liquid had been forced down his nose. The vet suggested that we try a new dog food and Solo Vino allowed as to how that was the only part of the day that he would like to remember. Solo Vino is a ‘part Lab/mixed breed’ dog. He’s probably about two years old. He’s getting prettier all the time, but when he first came to us on Thanksgiving he was starving and about the most pitiful thing you ever saw. Speaking of firsts, the last few weeks have probably been the first time he’s ever had enough to eat. For those of you who may be struggling with the name “Solo Vino” can mean ‘he just came’ or ‘nothing but wine for me’ or ‘only wine.’ No matter how you choose to translate it, the name works.

We celebrated New Year’s Eve quietly here at Hacienda de Perote. Only an occasional firecracker in the distance marked the passage of 2007; the only commentary was given by a hoot owl perched in the pecan tree outside the window. According to him, 2007 went by far too quickly, and his sage advice for 2008 was “Slow down and pay attention to the miracles.” At least that’s what I think he meant. My share of the evening’s champagne may have influenced my interpretation, giving it a more touchy-feely tone than was intended. He may have been complaining about the lack of prey. It’s hard to know with owls.