Looking Back on August 2010 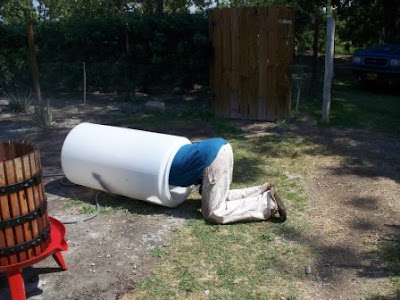 The winery and all its equipment is sparkly clean again. As you can see, Stanley really got into the spirit of cleaning today.

The vineyard is grape-free. Every one of those little berries has been harvested, crushed, fermented, pressed, and the juice is presently stored in sealed containers under the protection of air locks.

When all was said and done, we had a little more than 20 gallons of Sauvignon Blanc and about 75 gallons of our Hecho a Mano red blend. We didn't get quite as much red wine as we had thought we would - mainly because of an error in the marketing of our fermenters and storage tanks. The tanks we thought were 50 gallon tanks actually hold 55 gallons and the 80 gallon tanks actually hold less than 75. It's hard to do accurate estimating when you start off with numbers that are wrong. At any rate, we are very pleased with the quality of the wine. Right out of the press, it has a great taste that will only get better with a little time.

What a treat to have Jim here. He made the whole experience even more fun than usual. We used Tom Sawyer's technique and thereby got the absolute greatest productivity from our helper while maintaining an excellent attitude. That same technique worked with Antonio, also. He spent one whole morning picking grapes.

We took our press to Estela's house yesterday and left it with her so that she could process her Lenore grapes. It's the darndest way of making wine you ever saw, but the end product is a potion that she and her friends can drink by the gallon. 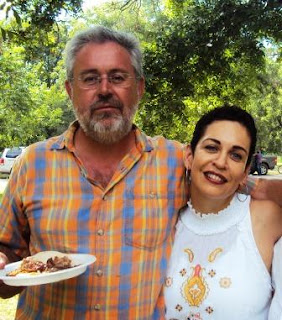 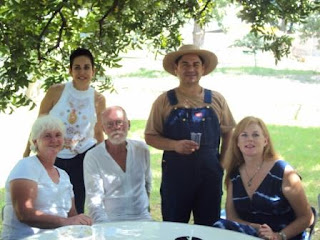 Our annual Wine and Grape Festival was held as always during the first two weeks of August. On Sunday the 8th, Stanley and I were invited to a feast hosted by Ferdi and Lucy Madero. What fabulous people! We met them through our often-absent neighbor, Eduardo, and we like all of them more every time we are around them. There were lots of people there: young, old, Gringo, Mexican, English speaking, non-English speaking. They all loved the wine and tomato salad we brought and the lamb was delicious! In the pictures above: Eduardo, Lucy Second Picture Lucy, Ferdi, Dona, Stanley, Liz (city planner from San Angelo, TX)

The grand day of the festival is October 10, Feast Day of San Lorenzo. That morning, Stanley and I packed a picnic to take with us and went early to enjoy a walk around the Casa Madero vineyards. That was absolutely the best part of the day for us. The crowds poured through the gates until there was no longer any place to stand, sit, kneel, or lean. By the time, the Blessing of the Grapes Holy Mass actually started, I could just barely see the top of the priest's head and maintaining my balance was a bit difficult. I was standing on a curb about three inches wide. Stanley had given up much earlier. We decided to call it a day, walked back through the vineyard, and came home. We did not walk through the fair grounds again this year. There just wasn't time with all the grape/wine making activities at our house. Maybe next year . . .

As luck would have it, the next week-end we scored another invitation to have dinner with Ferdi, Lucy, and Eduardo and we took Jim with us. This time it was just us and we enjoyed having them all to ourselves. Jim really enjoyed practicing his Spanish with Ferdi- which is always more fun when you are talking with someone who speaks excellent English.

Summer is always a time for introductions to new folks here at the hacienda, and this summer was no exception. There was the group from the Peace Corp and Saltillo University, the mother with her five daughters and their husbands (the mom regaled me for almost an hour with her tales of how much she hated Mexico), and the two gentlemen from Hungary who showed up just a few days after we had made our plane reservations to Budapest for the fall trip.

Topping off the month with Stanley's 70th birthday was like icing on the cake. We are so blessed.
Posted by Dona at 10:48 AM

On August 27th, we celebrated Stanley's birthday. How did he choose to mark the special day? We pressed red wine grapes, racked white wine, and ate salmon with tomato salad for dinner.

Stanley, you are the love of my life. Happy Birthday! And may all your days be happy!

We found this Western Diamondback Rattle Snake at the far end of our building. He was about 3 feet long - certainly not the longest of his type, but big enough to get our attention. Read all about him.
Posted by Dona at 6:01 PM

Horses in the Garden 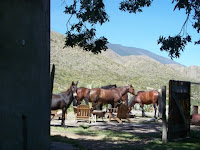 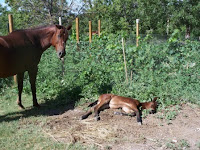 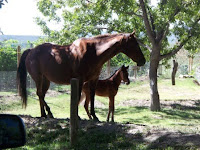 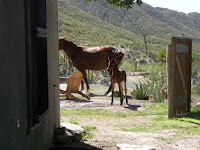 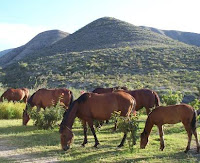 Not very many words are necessary. They were just thirsty so they came for a drink in the fountain, nibbled a little grass, posed for a few photos and then the baby had to have a nap. What better place than a soft watermelon vine that had slipped through the fence?
Posted by Dona at 5:46 PM

Did you ever see four people work so hard and have so much fun?
Posted by Dona at 8:22 AM 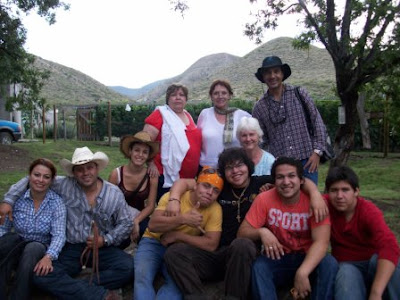 I was just wrapping up a conversation with my mom this afternoon, when I heard Stanley talking to Pancho, the man who brings the horse manure for our compost. I went out to say hello and discovered he had a young man with him. Well, come to find out, this young man was part of a group of 15 that Pancho was taking on a horseback tour. They were all soaking wet from the rain, but they all had smiles.


The group consisted of Katrina Troitsky, a Russian woman, a Venezuelan man (both professors at the University of Mexico, Saltillo) a couple of Miss Saltillo finalists, an agronomist who had just returned from three years in China, and assorted other Mexicans (both genders, all ages) - most of whom could speak some English, a few could speak a lot. Several of these people are affiliated with the US Peace Corp although the link was never really clear to me. 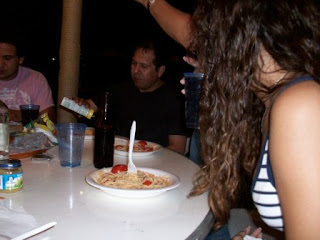 They were enchanted with the cherry tomatoes and watermelons. Stanley, Mr. Generosity, went to the house for bags and bagged up about 3 pounds of tomatoes for them. They are going to make pasta with cherry tomatoes, garlic and basil for the group dinner tonight. I have no idea what was on the menu before arriving at the Ashmore Market. 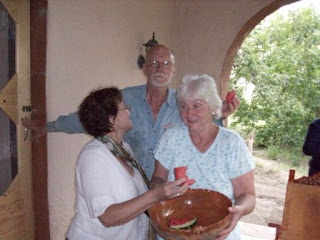 Then Stanley decided we needed to cut a watermelon. It was probably the best one yet.

Pancho was wanting to get them back before it started raining again, but he had a hard time getting them organized. They all wanted one more picture, one more hug, one more kiss. This one old lady must have kissed Stanley a half dozen times, assuring me each time that it was with "todo respeto." Yeah, right!

Dear Dona,
It was so unexpected and wonderful to meet you and Stanley. What a beautiful place you have. Pure God blessings!
Thank you for your hospitality! Your watermelon is the best I ever ate.
For the dinner that night we had spaghetti with the sauce made from your cherry tomatoes. It was delicious. Thank you again from all of us.
Here are the pictures.
Hugs, best wishes,
Katerina 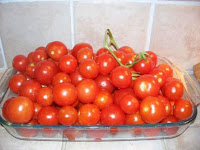 What's not to love? Beautiful tomatoes, melons, and watermelon. What more could a person ask for?
Posted by Dona at 6:33 PM